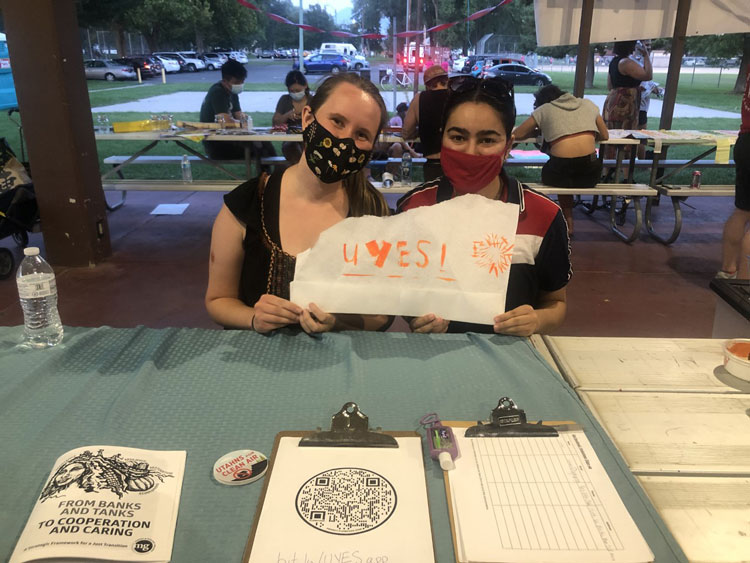 Maria Archibald is a second-year student in the UU Environmental Humanities Graduate Program. For her summer engagement grant, fall internship, and ongoing research, she has partnered with Utah Youth for Environmental Solutions (UYES) to develop climate justice and political education curriculum that will mobilize young people. Before her time in EH, Maria studied environmental science at the University of North Carolina–Asheville and taught ecology in Maine, Colorado, and California. After that, she ventured to Arizona where she developed a deep commitment to the Southwest and discovered her passion for grassroots organizing. She began to organize regionally and nationally with youth-led climate justice groups, including Uplift and the Power Shift Network, and spent four years coordinating the Rising Leaders Program at the Grand Canyon Trust. In August 2021, I talked with Maria about her work with UYES and the values and theories behind her project.

Brooke: What does your work with Utah Youth for Environmental Solutions entail? How does that work connect to your final project in EH?

Maria: UYES is a coalition of young people whose ages range from teens to early 20s. The organization came together in 2017 to take environmental action through legislation and education. Historically, they've had a weekend-long convergence every year for young people in Utah to learn about climate justice and how to take action. In the last year or so, those young people that spearhead UYES have been interested in building out a longer term and more thorough training program for youth in the state who want to get involved in the climate justice movement but don't know how to get started. There’s a lot of climate justice work happening in Utah, but youth often feel like it's hard to get that first bit of experience that will prepare them to get involved. UYES connected with me to facilitate a collaborative curriculum building process.

Every week, I meet with the students. I meet with one larger team of young people, and we brainstorm big picture ideas around what they want to learn and what they want to see in a climate justice training program for themselves and other young people. Then there's a smaller team that meets every other week, and we take those big ideas and start to transform them into curriculum materials and a training program.

I've also done an interview project with young climate justice activists in the Southwest to try and understand what experiences in their lives mobilized them from a place of knowing and caring about climate issues to being activated. I'm using those interviews to help inform the curriculum development process. If this curriculum is intended to mobilize young people, what are the experiences that mobilize young people and how do we build those experiences into a curriculum? That's the question I'm exploring.

For my final project in EH, I'm still playing with form and figuring out how to integrate the curriculum and interviews. I'm going to do an oral history project because I think it's important for those stories to be heard in the original voice. These people who have shared their stories with me are the best tellers of their stories, and I want my project to honor those stories. I'm also using the interviews and the themes that I've pulled from them to help build this curriculum and inform what sorts of experiences, learning moments, and conversations we need in a curriculum that's intended to mobilize young people. I'll be building out the curriculum, and then annotating it in some way according to the themes that I've learned both from the curriculum planning meetings and the interviews.

Brooke: What courses, readings, scholars, or theories have influenced your project? How have they shaped your approach to community engaged research?

Maria: I took an independent study with Brett Clark last semester that was focused on a mixture of democratic, political education and social movements. A lot of the readings that I did for that class have been influential. I think the low hanging fruit is Paulo Freire's Pedagogy of the Oppressed. While I think there's problematic elements of that text, it is revolutionary in how some educators have come to understand education as this participant-informed, student-focused, engaged, and reciprocal process. I think one of his biggest points is that nobody can plan a learning experience for another person or for another group of people, it must come from that group itself. That has informed the process behind my work. I could get this thesis done quickly if I was just writing a curriculum. But, doing it with a group of teenagers and 20-somethings from the community where we meet every week and make all decisions by consensus is a much more intensive, time-consuming, and slow-moving process.

People who have adopted and then further built on Freire's work, like Bell Hooks, have written a lot about engaged pedagogy. I think what these people are saying is you can't just be a teacher and impart knowledge on to students; education has to be a process that comes from the students themselves and is directly relevant to their lives, something they care about, and knowledge that they've participated in building and sharing with each other. That's a process we're trying to emulate in this project. In some ways, I think my final project will be much more about the process than the product itself.

I am thoroughly documenting the community engagement piece of my research so that the process can be emulated in the future rather than the actual curriculum. I don't think what we produce can just be copied and pasted and applied to a different situation, because it's something that we are co-creating with a group of young people that the curriculum is ultimately intended to serve. So, this type of research is contributing information around a process, including information around what didn't work, what could have been done better, how to honor needs and desires. I think that's what I'm hoping to give back—research on how to do responsible research, rather than a curriculum that can just be taken and implemented anywhere.

Brooke: What previous experiences in the youth-led climate justice movement inform your project?

Maria: For four and a half years before I came to grad school, I worked as the Rising Leaders Program Manager at the Grand Canyon Trust. In that role, I did a lot of similar work where I was creating political education and climate justice education programs with and for young people. The programs paired learning about climate justice issues with skills and trainings in how to mobilize. The programs that I've historically worked on have been intended to not just educate young people around what's wrong in the world, but also to put into practice the power we have as young people.

Eventually I got to a place with that work where I really loved what I was doing, but I was so busy that I didn't have time to take a step back and think about the theory behind the work and how to do it as responsibly and reciprocally as possible. I was so busy that it was like I learned how to do a thing one way, and then that was just how it was done. I didn't have the time to examine the process and think about who else has done processes like this. So, I wanted to come to grad school to incorporate more educational theory into what I had already been doing.

I have also organized for the last four years with Uplift, which is a youth led climate justice organization based on the Colorado Plateau and greater Southwest. I was part of the education and training team. So, I worked on putting together political education programs for incoming fellows. When I was a fellow myself, I put together curriculum for the convergence, which was a weekend-long program of climate justice education workshops.

What I'm doing with UYES builds on what I did in my previous job and have been doing in grassroots spaces for a while now. But generally, I felt like I was missing the opportunity to take a step back from doing the thing and rather spend time learning, thinking, and engaging with other thinkers’ and doers’ work to improve and strengthen my own approach. That's why I came to grad school. In some ways I'm doing the same type of work, but hopefully in a more thoughtful way.

Brooke: A lot of your work has been place-based. Why is place-based education important to you?

Maria: I really love doing place-based education, and I believe in the power of experiencing firsthand what it is we're trying to learn about and address. I believe place-based learning is most effective when it is directly tied to people's communities and perhaps a side of those communities that they haven't been fully immersed in before. So much of what I've been reading this year on educational theory says that engaged pedagogy needs to be relevant to students' lives for it to stick with them in a lifelong way or in a way that is transformative. Doing place-based work with young people in communities that they are somehow connected to, I think that is where transformative learning happens.

Since COVID started, I've done my best to keep my work place-based, but it's just different virtually. So, there’s something that has been lost. Right now, with UYES, we're planning for place-based, in-person work. At a recent meeting, I facilitated a conversation on transformative educational experiences, and almost every single person at that meeting brought up an experience in which they were immersed in place and community. So, it feels important, if we can safely do that, to have that be a part of the curriculum.

Brooke: Why youth? That has been a trend across all your work.

Maria: I love working with teenagers. I think teenagers are in this magical place in life where they have so much analytical capacity and ability to think through complex issues and understand root causes. There's really nothing you have to keep from teenagers in terms of the truth behind these oppressive systems that we're up against. At the same time, I find that they have this level of creativity and vision around how things can be done differently that even myself, at age 28, am starting to lose. I think the longer we live and work in the systems that exist, however much we might know that those systems are oppressive and wrong, we're getting steeped in it and it's hard to imagine alternatives. Teenagers are in this special moment where they can understand the complexities of the issue just as well as I can, but they also can imagine alternatives and creative solutions in a way that I sometimes feel like I'm losing access to because I've been living in the world as it is for just that much longer. That's a cool age, and I find it super inspiring. I think that's a big reason why young people have been at the helm of just about any social movement you could name. There's often a shortage of adults who want to support the creativity and vision of teenagers without telling them that it's not realistic or too idealistic. I feel a lot of passion for playing that kind of role, somebody who can support and facilitate this political analysis and learning process for young people without squashing that important visionary piece that is easy to lose as we age.