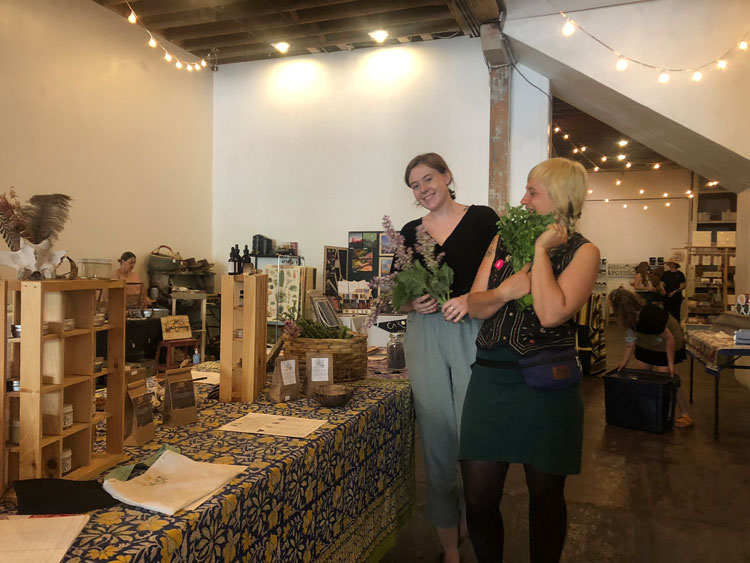 Riley Sayers is a second year student in the Environmental Humanities Program and a Mellon Community Fellow. In 2020, the EH Program received a three-year grant from the Andrew W. Mellon Foundation to support community engaged research. Our Mellon Community Fellows develop projects with a community partner that furthers environmental justice. Riley’s community partner is the Mobile Moon Co-op, a female and queer collective that strives to aid communities and ecosystems through education, empowerment, and botanical stewardship. Riley also organizes with the Salt Lake Community Bail Fund and Decarcerate Utah. In June, I talked with Riley about their work in the Salt Lake community, past organizing experiences, and their vision for a better future.

Brooke: What are you currently working on in the community?

Riley: I work at the Mobile Moon Co-op as a core member. My roles are administrative ecologist and the product planner for our herbal CSA. I'm also a writer for our zines and grant applications. Right now, we're in a stage of growth with a lot of grant money coming in, including from Environmental Humanities, so there's a lot to do to build infrastructure. I've been building up organizational systems that will hopefully contribute to our sustainability. I also do a lot with Moonboxes, which are monthly boxes of herbal products we curate, and I'm starting to make herbal products.

I’m also an organizer with the Salt Lake Community Bail Fund, which is a committee of Decarcerate Utah. One of my main roles is to actually go to the jail and post bail. So one to three times a week, I'll go to the bank and get cash and then go to the jail. We’re also doing grant research to find out where we can get funding for a lot of the very high bails, which can range from $25k to $500k. We’re also working on policy research--specifically strategies for communicating with the public about abolition and the harms of the cash bail system. For example, there's revenue coming into the county treasury from bail money that doesn't actually get returned to families,  individuals, nor the community as a whole. We're newly finding out that to get bail money back, you have to go through huge processes. I do other work with Decarcerate Utah as well. I am on the Building and Caring committee, and much of my work with DU has to do with our mutual aid efforts.

Brooke: How do you see the work you do with the Mobile Moon Co-op and Decarcerate Utah being aligned? What is the larger vision you’re working towards?

Riley:So the bail fund is very much focused on treating the symptoms of a harmful system and working towards dismantling these systems through educating the public and advocating for those who are most impacted by the systemic racism that is the criminal justice system. This work is very focused in the moment: Who can we afford to bail out? How can we support these individuals? The Mobile Moon Co-op centers on imagining the possibility of a better world and collectively learning how to build community in ways that are meaningful and that make abolition possible. Abolition can happen when we make prisons themselves obsolete. Infrastructure for community care and stewardship that centers the needs and voices of women, queer, trans, and BIPOC folks is a huge part of the Mobile Moon Co-op. These organizations support each other in this network. Each month, Mobile Moon donates 30% of all proceeds to a solidarity partner. The June solidarity partner was the Salt Lake Community Bail Fund. Supporting other organizations helps expand what the Mobile Moon stands for, which is that post-apocalyptic, post-capitalist dream of equitable ecologies.

Brooke: You came to Salt Lake in August 2020. Before that you were involved in organizing and activism in Columbus, Ohio. How do those experiences inform what you’re currently doing in Salt Lake?

Riley: In Columbus, and before the summer of 2020, I was mostly doing refugee and immigrant community care organizing, such as youth mentorship. I was also working on ecological urban gardening and food sovereignty projects. For the last year and a half of my undergrad, I worked at the OSU student farm, which was a five acre plot on the  edge of the university’s research farm that's just north of the city. We did organic farming, and we did a lot of ecological experimentation. I loved it. I have no science background whatsoever, but I found that working within a living laboratory made space for knowing the place and their needs more holistically. During COVID, we had to go through a lot of applications and bureaucracy to get back to work so that we could do CSAs that were free for students. We were able to return to operations, and all of our harvest went straight to free CSAs for students and families in the area.

At the beginning of last summer, I shifted to organizing for protest protection and community security commons. My undergraduate degree was in security intelligence, and I put that into practice for the people and against the institutions that claim ownership over these types of systems. The people of Columbus came together within a week to develop infrastructures to protect, provide medical attention, and care for protestors and activists, and these systems have grown and continue to hold the community today. Community security commons encompass everything from first responders such as street medics, white allies, and videographers to remote support for counter-surveillance and legal aid. I'm most interested in militancy. Militancy can look like protecting protesters with bikes, and it can also look like gardening somewhere that's private property and harvesting spinach out of the parking lot; to me, this is critical resistance that we cannot go without.

When I came to Salt Lake, I knew no matter what I would be doing, I wanted to contribute to local abolition work with a group like the Salt Lake Community Bail Fund and Decarcerate Utah. But I didn't want to lose the food and plant medicine production that I had already found as therapeutic and peaceful while working on farms and gardens in Columbus. I talked with Mobile Moon folks and went to a few meetings and work days, and it was very explicit that the militant, radical ideas that I've wanted to pursue are at Mobile Moon. I saw the most opportunity in Mobile Moon for putting money straight into the community through strategic means. So through the first Environmental Humanities Community Partner Grant that was disbursed in tandem with my fellowship, we now have a stipend for all solidarity partners that's $300 a month--this is in addition to 30% of all proceeds. Then money is also going to compensate the core members, educators, and allowing space for folks to enact their own projects and ideas with funding. Our partnerships are thriving, and our roots in the community continue to grow. One of those partnerships includes Black Lives Matter SLC. Ashley Finley, a co-founder of BLM SLC, is growing a garden at the Moonstead. Some of the money from the grant has gone to starters and other needs so that she can distribute produce bags to Black community members.

Riley: I say that militant ecologies--which are interrelationships between all human, non-human, more than human, soil, everything--are intentionally or inherently combative, destructive, and dismantling on the grounds of transformation and restoration. With militancy, I say that it includes physical acts of resistance and restructuring and building new things. Militancy includes and necessitates violence. I live out of the example of fungi for everything. For example, white rots have been capable of eradicating and repurposing toxics of extraction capitalism since before these toxics became abundant and oppressive. Mycology is militant; we're just not applying it. Militancy can look like strategic inoculations to clean up poisons and waste that corporations and the government purposefully place in Indigenous, Black, POC, and working-class communities.

For my thesis, I’m going to be compiling a collection of essays on militant ecologies. One of these essays, for example, will center revolutionary bike cavalries in urban spaces. Bikes are tools--for sustainable transportation, physical health, community, and sometimes holding the line between riot gear-adorned police advancing on protestors with deadly and disabling forces. Bikes’ mycelium in cities are especially on my mind, and I’m hoping to expand my work with community members and my knowledge on relevant mechanics to continue to make this sect of “recreation” accessible to all. I want to deconstruct the exclusion of militancy in environmental justice and abolition movements as we continue to lose lives and places to capitalism and white supremacy.